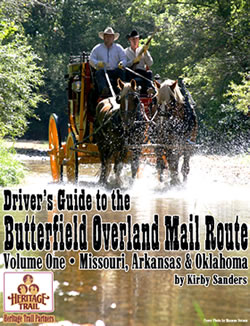 Authored by journalist Kirby Sanders and published by Heritage Trail Partners, the Driver’s Guide to the Butterfield Overland Mail Route follows the route through Missouri, Arkansas, and Oklahoma. Every confirmed stage stop along the line has been located and pinpointed to specific latitude and longitude. Point-to-point maps, specific driving directions, and historical information are included for every station. Most sites include historical and/or present-day photographs. Download a sample of the Driver’s Guide.

Kirby Sanders began his career in newspaper journalism and research during the early 1970s with the Houston (TX) Chronicle. During the 1980s, he continued his writing career as a freelance writer and photographer specializing in the travel and tourism areas as well as pursuing a passion for literature and poetry.

In the early 1990s, Sanders returned to daily journalism in East Texas. During that time, his signature research pieces included a series of articles mapping and identifying the historical markers of Henderson County for the Athens (TX) Daily Review. He also authored a series of notable articles focusing on an important aspect of the 1963 Civil Rights movement in Alabama.

In 1997, Sanders and his family moved to Arkansas, where he continued his career as a writer and journalist. His initial research into the Butterfield Overland Mail Route earned a 2002 Award for Excellence in Journalism from the Arkansas Chapter of the American Planning Association.

Kirby Sanders passed away in May 2015. At the time of his death, he was at work on volume 2 (Texas and New Mexico) and volume 3 (Arizona and California) of the Driver’s Guide to the Butterfield Overland Mail Route.